The MOU is expected to supplement information sharing, training and capacity building. This is so far, a big step and milestone for both forces. What is the role of SPF? It is obvious but you should be reminded again in case you forgot. 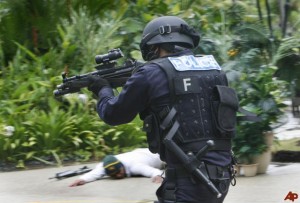 Police have the responsibility to keep and maintain peace and order. They should ensure that no one tries to compromise or threat the amity. They should also make sure that crimes are not present or prevented.

Police officers should be certain to enforce law so they can establish order. If the people commit something, the police should reprimand it.

The protection of individuals from crimes and other unlawful acts should be duly noted. Apart from individuals, police officers should protect their properties too.

The prime duty of the police is to prevent crimes. If the crimes happen, they have the task to investigate it and then make sure justice is served.

Basically, that’s it but there are police forces with special trainings like counter terrorism. The SPF, together with the army and all its branches work hard to achieve one common goal- to keep Singapore in the best possible condition. It is your role as a citizen to be obedient and vigilant.