Rules imposed strictly are meant for authority and order of a society. There are certain things which we would give up and stop in order to achieve a well-disciplined nation. This is what I learned from Singapore. Below are some DON’Ts in this disciplined country. 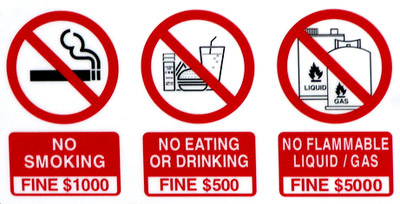 The country is not a big fan of chewing gums. These candies are prohibited in Singapore. This ban was enacted on 1992 and still existing. You cannot bring gum from other country and this is a popular rule observed by tourists. People chewing gums just dispose it anywhere so the government decided to ban it. Rather than educating people, they cut the root of the problem.

Tried eating and drinking in buses or trains? In Singapore, eating and drinking on transport trains and buses is prohibited. Posters which say a penalty of up to S$500 will be imposed for those who are caught violating this law. Better be full before traveling!

Reckless pedestrian crossing or Jaywalking is a big offense in Singapore. You have to walk half mile to reach a certain walk bridge to cross the road, but again it’s for the benefit of the people since vehicles are driving at a high speed.

Important seasons are more fun to celebrate with fireworks but this is not a good idea for Singapore. Selling or buying of firecrackers are banned in Singapore, yes you heard it right! But there are fireworks displays for special events or shows.

Many would think of these rules as pretty harsh and crazy but honestly, these could contribute more benefit and disciple to the society.